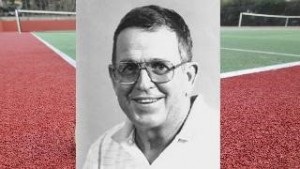 Last Tuesday we lost our very special former County Chair David Kent. David was a role model for everyone who knew him. He made anyone who worked around him want to be a better person. Like most great leaders, he was never far from his Bible as he reserved time to read scripture every day. Hardly a day goes by that I don’t ask myself, “What would David do?” I miss him.:

To honor David, Republican Party of Brazos County’s office will be closed Friday November 13th. Thank you to Jug, Debbie, Kevin and Eric Capps for providing the commemorative wreath that will grace Headquarters Friday in David’s memory. If you haven’t had a chance to read about David Kent’s remarkable life, his obituary follows.

David Alvin Kent, a career teacher and tennis coach who shaped the lives of thousands of young people, died on November 3rd in Cedar Park, Texas, he was 80 years old. He was born on October 30, 1935, in Perryton, Texas to Charley and Juanita Kent. David graduated from Amarillo High School where he was a standout multi-sport athlete. Following high school, he attended Texas Tech on the first tennis scholarship ever awarded there. In 1957, he married his high school sweetheart, Eileen Jacobson.

David was best known as “Coach” to the many, many people he inspired throughout his career as a tennis coach. He taught and coached at Amarillo High School from 1958-60 and Midland High School from 1960-69 prior to joining the collegiate ranks. During a long and illustrious career, Kent became one of the most successful tennis coaches in NCAA Division I history. Over 27 seasons split between West Texas A&M and Texas A&M, Kent compiled a 516-223 record, which was the 11th best in Division I history at the time of his retirement. Kent led the Buffaloes to six Missouri Valley Conference titles and helped the Aggies to a Southwest Conference championship in 1994 and a pair of Sweet 16 NCAA berths (1985, 1994).

Kent won his 500th dual match on Feb. 25, 1996, becoming only the ninth NCAA Division I coach to achieve that feat at the time. He was inducted into the Intercollegiate Tennis Association Men’s Tennis Hall of Fame in 1998. At the induction, he reflected on his career saying, “Coaching is fun. I really enjoyed it all my life, and it was a challenge. I didn’t look at it as a job. I . . . loved to get up early in the morning and practice and go to tournaments. It just never seemed like a job to me.” In addition to the ITA Hall of Fame, Kent is a member of the Texas Tennis Hall of Fame, Texas Tennis Coaches Hall of Fame, the Panhandle Sports Hall of Fame, and the Texas A&M Athletic Hall of Fame.

Coach Kent is nationally known as a “builder of champions,” evidenced by his win–loss records and numerous championships. But those who knew him realize his greatest accomplishment and joy was in his role as a “builder of character.” As a coach for 38 years, Kent influenced the lives of hundreds of high school and college athletes. He also directed summer tennis camps for 24 years where he shaped the lives of the thousands of young people who attended or worked at the camps.

Kent loved politics and the Bryan–College Station community. After retiring from coaching, Kent was Chairman of the Brazos County Republican Party for 12 years. In 2000, David and Eileen served as delegates to the Republican National Convention in Philadelphia. He volunteered in the community as a Gideon and as a member of the Blinn College Brazos County Advisory Committee.

Faith also played an important role in his life. David and his wife Eileen were actively involved at Grace Bible Church in College Station and members of Northwest Fellowship in Austin. Often volunteering as a greeter at Northwest Fellowship, David enjoyed making every attendee feel welcomed and special. He was also a board member of the Brazos County Child Evangelism Fellowship and Fellowship of Christian Athletes.

A man of character in every facet of his life, David never hesitated to shower those around him with generosity and words of encouragement. He gave freely of his time and money. As a coach, husband, father, grandfather, and friend, David truly loved to build others up and encourage them in every endeavor. This encouragement and support has left a lasting mark on everyone who knew and loved him.

A memorial service celebrating David’s life will be held on Friday, November 13, 2015, at 11am at Northwest Fellowship, 13427 Pond Springs Road in Austin, TX, where Pastor Trey Kent will officiate. A private interment will follow at the “Aggie Field of Honor,” 3800 Raymond Stotzer Parkway in College Station, TX.