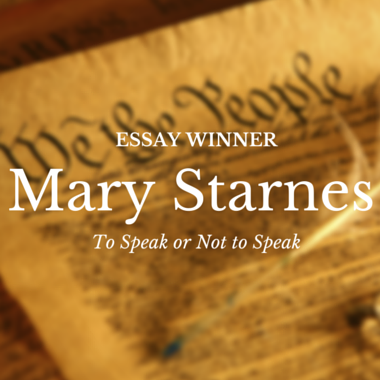 To Speak or Not to Speak

The elegant cursive handwriting initially catches his attention. The student moves around his classmates to get a better look. Gazing at the slightly shriveled document, he wonders how a single paper could establish an entire nation. This is the Constitution, America’s guide for government. After skimming the Articles, he spies the Bill of Rights. Only last week his government class studied the First Amendment’s clause about freedom of speech. Just then, a classmate complains saying, “This field trip is so boring. I can’t wait until lunch.” Immediately after, he hears a protesting mob, outside the National Archives, chanting passionately against a new law. Ironically, both the classmate and the mob have exercised their freedom of speech. Whether a petty private complaint or fierce public protest, the First Amendment protects every American’s right to express himself. Second only to freedom of worship, freedom of speech remains the most fundamental freedom of this nation. Ever since our forefathers instituted it to protect other freedoms, freedom of speech permeates American life in current events and my own life.

America prides herself as perhaps the freest nation on this earth. She guards her freedoms so closely because of a legacy established a little over two hundred years ago. In 1791, the Framers of the Constitution decided to add to the Constitution a profound list of rules called the Bill of Rights. The first rule is the most important; “Congress shall make no law respecting an establishment of religion, or prohibiting the free exercise thereof; or abridging the freedom of speech…” (US Const., Amendment 1). Interestingly, past experience of religious intolerance prompted our Founding Fathers to raise freedom of worship above all other freedoms by listing it first. Yet, our forefathers brilliantly added freedom of speech immediately after because, as Professor of History David J. Bodenhamer asserts in his book, Our Rights, “it is how we protect all of our other rights and liberties” (57). Our forefathers knew that to ensure religious freedom meant upholding people’s right to express their beliefs. This includes various forms of verbal and symbolic speech. Not to mention, should the government violate religious freedom, people can legally speak out against this injustice. If freedom of religion is the king of rights, then freedom of speech is its queen.

Our forefathers also included freedom of speech in the First Amendment for another reason. Namely, they recognized that each man has free will. As radio talk show host Mark Levin points out in his book Liberty and Tyranny, “the Natural Law [of free will is what]… the Founding Fathers adopted as the principle around which civilized American society would be organized” (25). Indeed, Americans cherish their ability to choose for themselves. One way choice is manifested is through freedom of speech. Free will is inextricably exercised each time a person voices his opinion in a public or private sphere. This freedom is so crucial to the heart of what it means to be human. In fact, English poet John Milton succinctly affirms this when he writes, “Give me liberty to know, to utter, and to argue freely according to conscience, above all liberties” (Bodenhamer 60). We, as Americans, are so dedicated to “the right to decide for ourselves and to pursue our own destiny” because the Framers included freedom of speech in the First Amendment (Bodenhamer 60). Thus, freedom of speech has given people the ability to choose between speaking the truth and opposing it. Without freedom of speech, individualism fades and humanity succumbs to monotonous slavery under the government’s demands.

Every day millions of Americans exercise their freedom of speech. Various forms of speech have marked America’s history in positive and negative ways. For one, freedom of speech is used to create a culture of compassion and life. In fact, last school year in Washington state, high school senior Konner Sauve created an anonymous Instagram account, using it to send uplifting messages to his classmates (Pelletiere). Through evolving social media, Sauve used his freedom of speech to bring light into the lives of others. However, unlike Sauve, some people abuse their freedom of speech. For instance, members of the Westboro Baptist Church “frequently [demonstrate] at military funerals, claiming that the deaths of the soldiers were a sign that God disapproved of the acceptance of homosexuality in the United States” (Ginsberg et al. 130-131). Thus, these protesters bring only pain and more grief to families who have lost their loved ones. Despite the hate caused by these protests, kindhearted Americans like Konner Sauve continue to show this nation how to build up a better world through freedom of speech.

Personally, my own life involves freedom of speech on a daily basis through formation as an individual. An often unconsidered aspect of free speech is how it affects others. When I witness other people exercising their freedom of speech, I am not only exposed to their audible words but also to the ideas and motivations behind those words. Over time, I amass a variety of opinions and perspectives from which I develop my own understanding of the world. In other words, freedom to speak is freedom to think. Mass media is a prime source of free speech and thought. For example, newspapers, broadcast stations, and social media networks feed a vast array of viewpoints into the public ear. I am affected because I hear what they say. Every day, whether I realize it or not, I am ideologically influenced by the secular and the religious, the conservative and the liberal, the optimistic and the pessimistic. In turn, I must strive to form the best version of myself with those ideas.

Freedom of speech defines America well. What began with a few educated men, visionaries who desired to establish a nation of people free from tyranny, culminated with the birth of free speech. It lives on in public events and private lives. Yet, this freedom is still a preserved privilege. President Ronald Reagan once said, “Freedom is never more than one generation away from extinction…. It must be fought for, protected, and handed on” (Levin 205). We must relentlessly combat any attack on our freedom to speak the truth, such as political correctness. United under one Constitution, we must always fulfill our duty to speak the truth, no matter the cost.